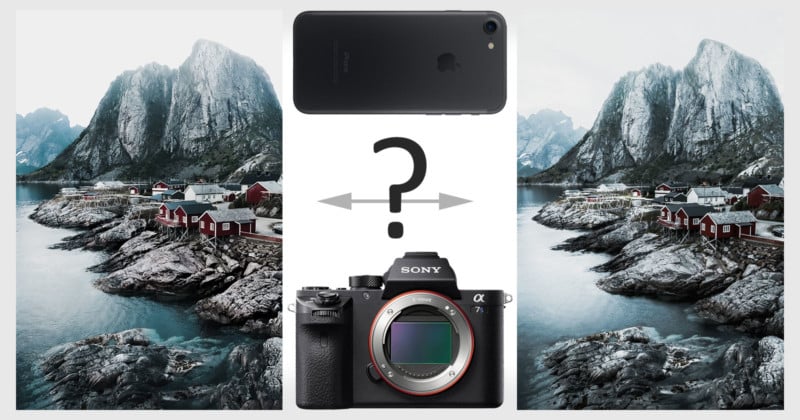 Sensor image quality has advanced so much over the last few years that phone manufacturers are boasting photographs that rival those from larger mirrorless and DSLR cameras. Some, like the Xiaomi Mi CC9 at 108 megapixels, quadruple the resolution of my best camera.

The iPhone 11 Pro and Google Pixel 4 have incredible night mode capabilities using imaging algorithm and stabilization that’s comparable to the high ISO capabilities of my Sony Alpha. Most of them shoot 4K video at 60 FPS. Between using Filmic Pro for film and Snapseed for photos, I have more options than ever with what tools I choose to shoot with.

And that’s just it. Options.

As a photographer and filmmaker, I don’t feel anxious that phones are allowing more people to produce footage that is comparable to my bigger and more expensive set-ups. In fact, I feel better knowing that on days in which I don’t feel like lugging my gear around or even taking my camera out to capture some food photography, I have the option of producing something that is high quality and sometimes indistinguishable from the images coming out of my Sony a7 III.

And I want to prove that using two photographs I took using my Sony a7S II and iPhone 7 (both are 12-megapixel cameras, both a few years old) a couple of years back in the Lofoten Islands of Norway. At the time, I didn’t plan on doing a comparison — I just happened to take the image first on my phone before pulling out my camera to get the shot with a slower exposure.

While resorting through my images recently, I came across the two images side by side when I did a batch edit and noticed that they came out differently (JPEGs don’t respond to the same changes as RAW files). Out of curiosity, I spent about 5 minutes to see if I could make the images similar.

The results were interesting. In fact, they were getting so close than I spent another 5 minutes to spot edit a few things to see if I can make them indistinguishable.

Here are the two photos: 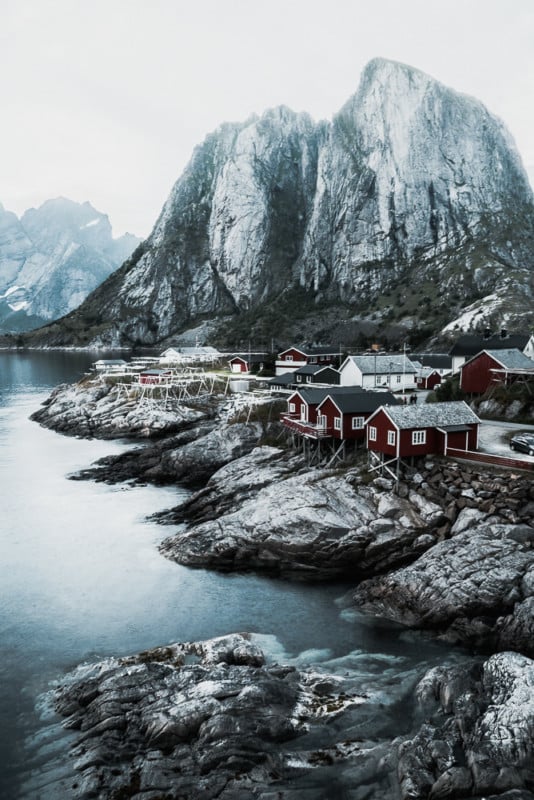 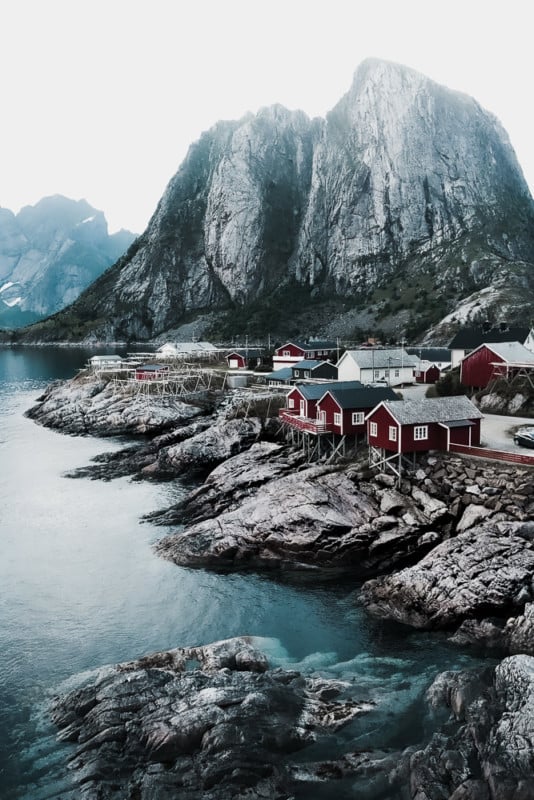 Did I Edit The Images?

Quite a bit. The process of creating a photograph is different for everyone and has only ever been limited by the tools that we have access to, whether be it in a physical darkroom or today in Adobe’s Lightroom (and Photoshop). Personally, I do most of my image editing in Lightroom. It’s fast, allows me to do most of the manipulation I want, and I can batch edit a bunch of similar images.

For these two images, I played around quite a bit with the white balance temperature, colors, exposure, contrast, highlights, shadows, curves, clarity, texture, and dehaze. The Sony a7S II image was slightly wider at 24mm on a full-frame sensor, so I cropped it some to match the iPhone’s field of view and I cropped the iPhone into a 2×3 aspect ratio to match with the Sony image.

Below are the edited images next to their originals.

Comparison With The Original Images 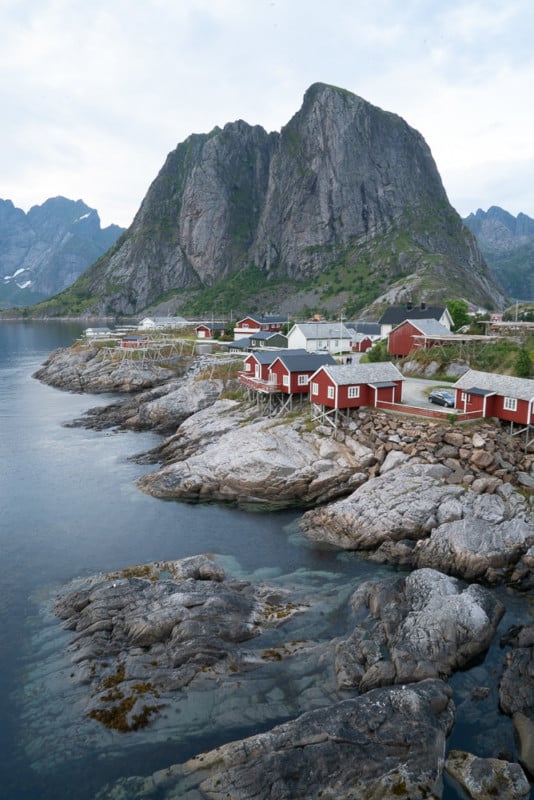 In the Sony a7S II original, you can more details in the cloud and the overall colors, tone, and contrast of the image are different from the edited version. I shot this with the Sony 24-70 f/2.8 GM lens at .8 sec shutter speed, f/22, and ISO 100. The slightly slower shutter speed allows me to blur the movements of water just a bit. I was kicking myself for not bringing any graduated or ND filters to allow me to shoot even slower than this and to retain the details in the cloud. 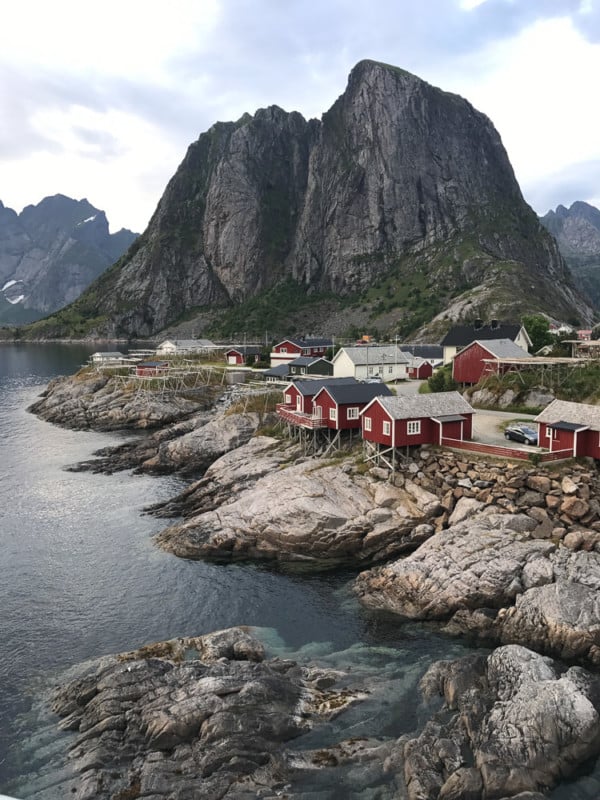 In the iPhone 7 version, the first noticeable difference was the completely blown highlights in the cloud. The phone camera also exposed it a bit darker and warmer than a7S II. Other than that, the details are very similar and, in fact, the overall image is sharper than the Sony a7S II because there was some accidental motion micro-shake with the a7S II. The iPhone image was taken at 1/120 sec, f/1.8, and ISO 20.

For both, I added a gradient filter from the top down over the mountains to blow out all the clouds completely and went negative on the dehaze and clarity to add a soft glow to the top of the mountains. This effect ultimately hid the shortcomings of the iPhone sensor with not being able to capture the same dynamic range that a Sony RAW file can.

Below are two cropped views to give you a sense of detail. 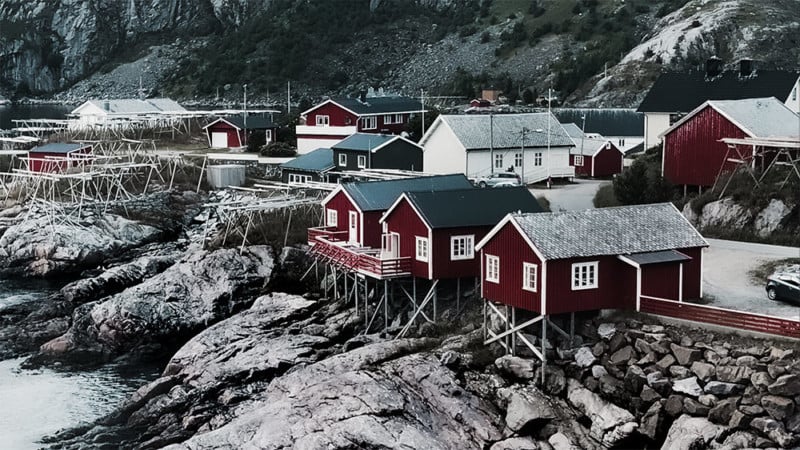 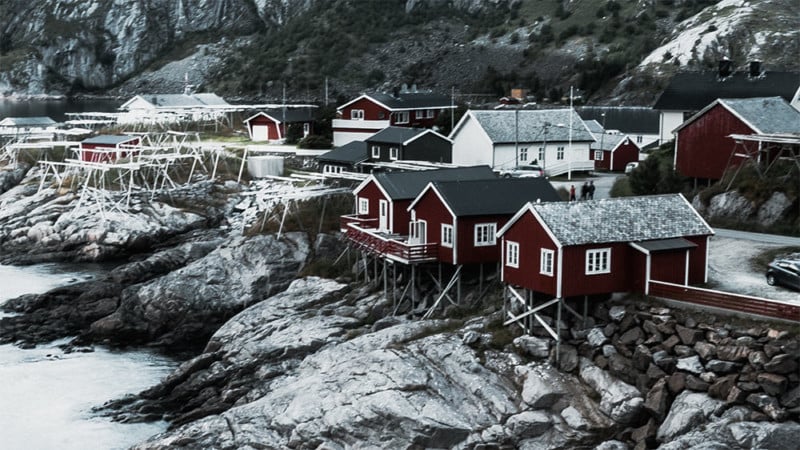 Like I mentioned earlier, shooting at .8 sec on a travel tripod standing on a windy bridge created some unwanted shake in the a7S II image. On the iPhone image, the detail is pretty sharp, and sometimes almost too sharp for me. To compensate for that, I dialed down the texture a bit to de-sharpen the image.

You can click here for the iPhone and here for the Sony to download higher resolution versions of the two images for pixel peeping if that’s your thing.

So did you guess correctly above? The a7S II was the first (top) one. Congratulations if you guessed it right. For me, it’s still hard when I look at them side by side, but the giveaway would have been the blurred movement in the water from the slower exposure.

Is Your Phone Good Enough For Travel Photography?

The short answer is yes. With careful composition and exposure, you can take spectacular photographs with your phone. With all the new phones sporting multiple cameras and crazy imaging algorithms to produce some high-quality images, you have a lot more features at your disposal with the device that you’ll always have on you.

With the iPhone 11 Pro, you can even get some beautiful portraits with some nice optically-produced bokeh at a tighter focal length. For landscapes, you can throw on a wide adapter and match the super-wide field of view of my widest camera lens. Even without it, you’re getting a pretty wide image.

With the Snapseed and Lightroom app on your mobile OS, you can edit images even quicker than on your laptop/desktop software. It’s crazy how fast I can create an image out of Snapseed and send/share it right away. I’m finding myself content with shooting on my iPhone a lot more than I was in the past. Even when I’m not, sometimes I’ll send the images from my camera to my phone and do an edit there for social media instead of waiting to load it onto my computer.

Ultimately, as far as photographs go, I believe the content of a good, compelling image will outweigh its technical specs, always. As a photographer and archivist, I want to have the best quality that I can get. When it comes to sharing, most content is consumed on mobile devices where you can hardly appreciate the qualities of a 50-megapixel camera. You probably can’t tell the difference between a 24- and 12-megapixel camera because of the relatively low image sizes that are uploaded and further compressed before viewing.

In other words, as long as an image looks good, most people won’t care about the megapixel count or even what camera it was taken with.

As far as video, which I will go into detail in a separate post, most cameras now shoot 4K 60 FPS, which will allow you to create some beautiful slow-motion footage. Using the Filmic Pro app, I have more control over my settings and have used footage shot from my phone mixed in with my a7S II footage.

The answer is basically yes, you can use your phone for travel photography.

Is The End Near For Professional Cameras?

Absolutely not. While I used this example to illustrate what you can do with a camera phone image (and not even the latest iPhone which is far better than the iPhone 7 camera), a lot of post-processing and artistic intent went into the final image. With the a7S II, I was able to shoot at a wider angle that I preferred (and even wider if I put on my 16-35mm lens). The built-in cameras are still limited in what focal lengths you can shoot with (although with all the triple and quad camera systems, that might change soon).

Mirrorless and DSLR cameras will, for the most part, still produce better images out of the camera than your phone, and allow you more flexibility with interchangeable lenses. For images with more shallow depth of field, the bokeh created digitally is currently not as good as the optical bokeh you get from different lenses. I will almost always shoot with my camera if I want to shoot portraits.

I also prefer the RAW images that come out of my cameras, which gives me more latitude to make fine adjustments. I’ve seen some amazing edits and composites from artists using JPEG images, so I’m not saying it’s not possible, but it’s just a little easier for me to have more data and detail to work with in my edit.

Ultimately, both my Sony (currently a7 III) camera and iPhone (currently XR) are tools, and I always process the images to create a final image that I envision and want to share. Learning your tools is the best way to get the most of your images and constantly relearning is the only way I’ve found to get better and not get stale.

These are all personal preferences, so how you look at it might be different, but it’s certainly interesting for me to see how far camera phone images have come since I first took a photo with my Sony Clie UX-50 PDA.

About the author: Kien Lam is an international photographer and filmmaker based in San Francisco. The opinions expressed in this article are solely those of the author. He runs whereandwander.com and believes in living for those moments that make the best stories, told or untold. He is working through his bucket list and wants to help others do the same. You can find more of his photos on Instagram. This article was also published here.